I was looking for another desktop USB microphone for any second desk. Currently I’m using a wonderful Blue Yeti with my Mac on my main desk (or Studio A as we like to call it), and every time I do a screencast or podcast on my Windows workstation (or Studio B as we’d like to call it), I have to bring over the Blue Yeti.

As luck would have it, the lovely people from ZAFFIRO liked my previous lapel microphone comparison so much that they offered to give me their new desktop USB mic for free, in return for an honest review. How could I refuse?

So I took a look at their latest product and did a test recording (see above). Here are my thoughts. 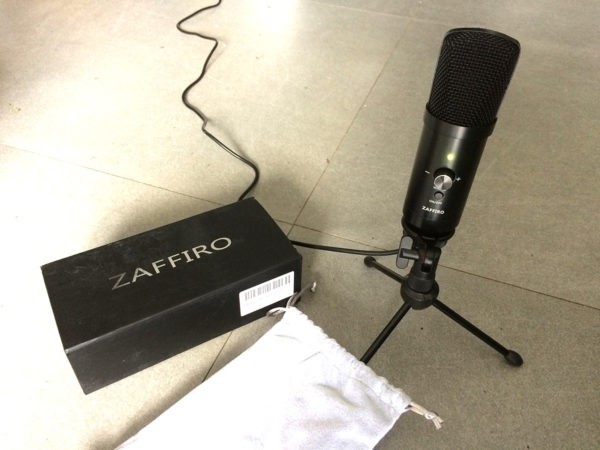 The first thing that struck me was the box itself. Unlike many of the cheaper products we get from China these days, the ZAFFIRO Desktop Mic didn’t come in a buff brown generic carton. Instead, it came in a luxurious matte black gift box, held together by magnets. On top of which a silver embossed ZAFFIRO icon greets me. Swish!

Picking up the box itself reveals that the product is much heavier than I had expected. The microphone with the box weigh about 600 g, or about one and a half pounds. This tells me I’m not dealing with a cheap plastic product, but indeed with something that may rival the Blue Yeti. Perfect – that’s exactly what I’m looking for.

In the box we find a silver-grey furry bag, closed with a silver drawstring. It contains the microphone with its attached USB cable, affixed to a mini tripod stand. The whole thing folds together to a height of about 18 cm and a diameter of about 6 cm (or 7″ x 2.5″). The box also contains a small folded manual with some technical details – I’ll include a scan at the bottom of this review.

At the front of the microphone there’s a green LED,  volume control knob and an on/off switch. Let’s see what this thing sounds like. 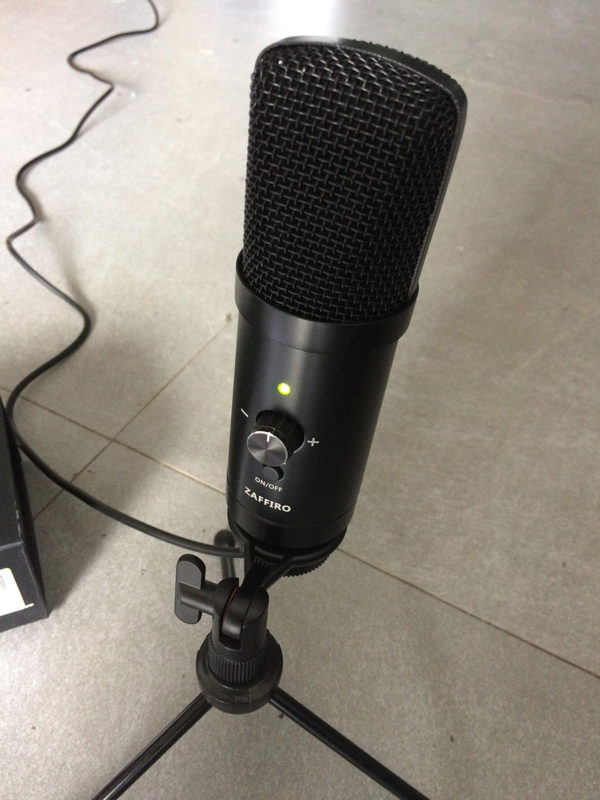 You can visualise this omnidirectional pattern much like a cloud emanating from the microphone, in the shape of a cartoon club (the one Pebbles or BamBam from The Flintstones would use). A quick test will tell us where it will pick up our sound best.

Like I did in the video above, I turned the microphone around while speaking into it from all directions – including the top, expecting that this will be where that omnidirectional cloud pattern will emanate from.

Turns out that’s not where the ZAFFIRO sounds its best; instead, when spoken into the front it will sound the loudest and clearest – just like the Blue Yeti microphone does. Good to know!

My first impression was that the levels, even with the volume knob set to its highest position, and my Mac’s input levels set to the highest level, there’s no danger of distortion. Quite the opposite: when I speak with my normal voice, I have to increase the levels to get close to 0dB.

This is good to know, because with other products that easily allow input levels that allow for distortion, some users may accidentally degrade their recordings. It’s also not great news when you reach the upper limit of your software’s gain adjustment. For desktop use though (which is what this mic id designed for), it’s perfect in my opinion.

However, some may argue those levels are not high enough coming out of the mic.

The picture on the user guide suggests that this direction might be the top of the microphone. However, my tests show that it’s actually the from of the microphone. So when you’re facing the knobs directly, with the ZAFFIRO standing up tall, it has – in my opinion at least – the best sound reproduction. Watch my video for details.

The ZAFFIRO comes pre-mounted on a fold-out mini tripod in the same black lacquer as the rest of the microphone. Both are made of metal, both are heavy and sturdy. While the microphone looks expensive, the little tripod and its screw has a touch of cheapness to it.  It’s functional enough though, and has rubber feet so they won’t scratch a wooden surface.

Pro Tip: place something like a mouse pad underneath it, otherwise you’ll hear keyboard typing while recording (I do that frequently, and I’ve put a big block of foam underneath my mics – just thought I’d mention it).

The tripod can be removed from the microphone though, and instead of the ring that holds it in place, a standard 3/4″ professional mic stand can be attached.

The 3m / 8ft USB cable is attached to the microphone and cannot be removed.

Here are two scans of the user guide. Click to enlarge.

Does it work on the iPad?

According to the User Guide and the Product Description, the ZAFFIRO Desktop Mic is not designed to work with anything other than a “proper” computer – like a laptop or a desktop computer. However, in the past I found that many standard USB devices do work fine on the iPad with the appropriate USB connector (which is part of Apple’s Camera Connection Kit). I thought it doesn’t hurt to try a quick test recording on my old iPad 3.

I’ve tried it with a free app called Tape Recorder as well as iMovie (both under iOS 9, because that’s the highest version my raging hardware supports) – but if it works on that, logic dictates that it will probably work on newer hardware with the USB to Lightning connector as well.

There’s of course no guarantee, but what limits most USB devices from operating on iOS hardware is usually the power that they draw – and many tablets and mobile devices just don’t support more than a few mA. Should you be in a situation where it’s not working for you, try using a powered USB hub in the middle. Those devices can inject the necessary juice for many devices to work that otherwise would not.

Watch my video above, or listen to the podcast episode at the bottom of this page for a side-by-side comparison between this mic and my Blue Yeti (Silver Edition). I’m uttering the phrase “the big brown fox jumps over the lazy dog” several times over at around 08:55 (and briefly at the beginning of the video too).

I think both the Blue Yeti and the ZAFFIRO sound wonderful. They each have their own characteristic, and I can’t say that one sounds better than the other. They’re different, both having a very warm character with pristine overtones. It would be tough to make a decision on sound quality alone.

Taking into consideration that the Blue Yeti costs $100 more than the ZAFFIRO though, this would make my decision extremely easy.

However, for the extra cash, the Blue Yeti has many other qualities, such as

At the end of the day, you get what you pay for. If I had the cash, I’d buy another Blue Yeti in a heartbeat, because it is versatile enough to record pretty much every circumstance I can think of. Your voice, groups, bands, two speakers on opposite sides, that sort of thing.

The ZAFFIRO on the other had is good at recording your voice while sitting at a desk, and that’s it. Then again, that’s exactly what I’m looking for in my Studio B.

For that price though, the sound quality is seriously stunning. I highly recommend this mic for casual YouTubers, podcasters and PC gamers. Make yourself heard and sound like a pro.