As much as I appreciate the idea of Auto Layout, I don’t think it likes me very much. In turn, I don’t like Auto Layout very much. The pain and hassle it takes to make several UI elements fit well on a 4 inch screen as well as a 3.5 inch screen regularly drives me crazy. On paper it’s a great idea – but in reality not fit for prime time. 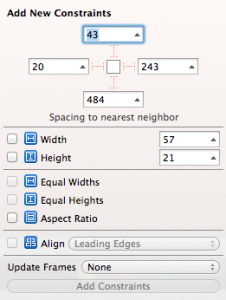 Here’s how: First, finish one version of your storyboard. Next select it and head over to File – Duplicate. Give the second one an appropriate name, then tweak your UI elements so that they look nice on the other screen size.

Now add this to your AppDelegate.m:

Now we need to make sure it gets loaded appropriately. We’ll take care of it in AppDelegate.m like so:

This overrides the default storyboard that’s declared in your project settings. You can expand the above method by checking which iOS Version the device is running, and of course returning an iPad storyboard too.

In your face, “Auto Layout”!