Did you know you can run Commodore BASIC v2 on your Mac and Linux systems as a scripting language? It’s true – thanks to the marvellous efforts of Michael Steil and James Abbatiello. They’ve adapted the original BASIC v2 as featured on the VIC-20 and C64 with additional routines so that it works natively on modern machines. It’s ingenious!

You can get the full source code on GitHub – it works a treat!

For those who don’t quite know what to do with it, here are some instructions that’ll help you get CBM BASIC up and running on macOS.

GitHub provides a convenient way to either clone a repository on your local machine if you have GitHub for Desktop installed, or you can download a ZIP file and unZIP it somewhere on your system. Once done, you should see a directory structure that looks exactly like the repo on GitHub.

You need a few utilities installed your your Mac to be able to compile files. Downloading Xcode will ptovide you with an excellent (and free) IDE as well as the command line tools needed to do that (gcc, make and several other goodies). You might be able to bring those components in using the Homebrew package manager.

Using your Terminal app, navigate to your unZIPped folder. It includes a MAKEFILE so there’s no need to mess with any parameters. Enter “make” at the command prompt, and after a few moments you should have a file called “cbmbasic” without an extension in the same directory. That’s the binary for your Mac.

To make it executable, we’ll have to tweak the file permissions – otherwise our operating system won’t be able to run it. We’ll do it using the chmod command:

You can test if it works by calling the binary without any parameters like this:

If all goes well you should see something like this: 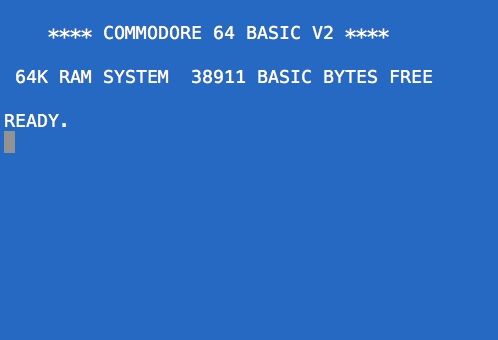 For easy access, copy the binary over to your /usr/bin directory. That’s where common command line utilities are installed on Mac and Linux systems. The added benefit is that the path to that folder is already in your local $PATH variable, and as such you can simply type “cbmbasic” from any location when you’re on the command line.

Here’s how to copy the binary over (this will ask for your administrator password):

When you run the binary it will bring up something like the standard BASIC command prompt we’re used to seeing on the Commodore 64. There are however a few important differences between a C64 emulator and this implementation:

Other than that, you can start typing like on a real machine. Be careful with certain POKE commands though as those may call system routines that might not be implemented.

LOAD and SAVE commands have been tweaked to reference the command line structure. They work just fine, but will load and save files in Commodore file format (which is not clear text ASCII – more on that later). For example:

The above displays the directory of the current folder, much like it was an attached floppy drive. How cool is that? You can reference folders using both LOAD and SAVE just as if you were on the command line.

You can also type in programmes and run them – however the cursor keys won’t work, so there’s no screen editing options. Programmes SAVEd from direct mode cannot be loaded from the command line, only from direct mode (i.e. when launching the binary without parameters).

Running Programmes from the Command Line

The real power of this implementation can be seen when we run files from the command line. Those files must not be SAVEd from direct mode, but instead are simple clear text files. The extension doesn’t matter, but for good practice, let’s store them as .BAS files (much like shell scripts are stored with the.SH extension, or PHP files would be stored with the .PHP extension… you get the idea).

You can write standard BASIC programmes use your favourite text editor (like vi from the command line), or try one from the “test” directory that’s provided with the repository.

Imagine we had a file called “hello.bas” that we’ve created with vi, looking like this:

To run our file, we can simply define it behind the binary like this:

This will greet us with the “Hello World” message on the command line.

Alternatively, we can specify the full path to cbmbasic at the beginning of a file (she-bang notation) and run it just like any other script file. Observe please:

If the file was called “hello”, we’d need to change the permissions again so that the file can be executed:

Fear not – I’ve got a macOS binary that was compiled on 10.12 “Sierra”. You can find it in my fork of the project. Check out the “binaries” folder.

Does it work on Windows? Or on Linux?

I’ve tested compiling and running this puppy on CentOS 6 and 7 with roaring success. The above steps worked fine for it, so I’m assuming it’ll work on other Linux flavours just as well (the beauty of portable C code).

According to the author, it works fine on Windows too – however I have no idea how to compile source code on Windows, so you’ll have to figure that out for yourself. I hear good things about Visual Studio  – if I work out how to do it, I’ll add it to the “binaries” folder on my GitHub Fork.

Can I write my own extensions to BASIC?

Apparently so – check our Michael’s site and repo for details:

Right now, if you run SYS 1 from direct mode first, you can use the SYSTEM command (followed by anything you’d like to execute on the command line in “double quotes”) as well as LOCATE (followed by an x and y coordinate to place the text cursor) and WAIT.