Last year, in September 2017, I ordered a RUIPU 24,000 mAh Solar Power Bank in preparation for Hurricane Irma here in Florida. I’ve had a whole year’s worth of experience with this gadget and decided to buy another one.

This thing rocks! Let me tell you all about it, and how to use it in this review.

I left a very positive review on the previous product, which has since been discontinued and all customer reviews have disappeared. I had no backup of my review, thinking that it would remain with Amazon for years to come.

Not the case! So I thought, I’d better post my hard work both on Amazon, and somewhere else, a place of which I’m in control. And that’s here. I’ll start migrating my previous reviews over here too, just in case.

Ruipu’s model was then only one of the few power banks featuring a solar panel, and having one built into my emergency NOAA weather radio, I thought it would be handy to have a solar option in a power bank too. Just in case the power lines are interrupted.

Turns out I never needed this option, because once charged up, the amount of energy stored in this product is phenomenal. It seemingly lasts forever! 24,000 mA is huge amount. With one full charge, I am able to keep my iPhone powered for weeks.

By comparison, 24,000 mA is about 14x the size of a regular iPhone battery, and nearly 10x the size of an iPhone Plus battery. Even with a bit of power loss during energy transfer, it’s easy to see that a fully charged Ruipu power bank can fully charge up your mobile phone at least ten times without having to be charged itself.

I once charged two empty iPhones and an iPad on this power bank (all at the same time, thanks to its 3 USB ports), only to find that the Ruipu was still more than half full. It’s even powerful enough to power and charge up my wife’s Acer Chromebook, a fully fledged laptop. It’s that powerful. 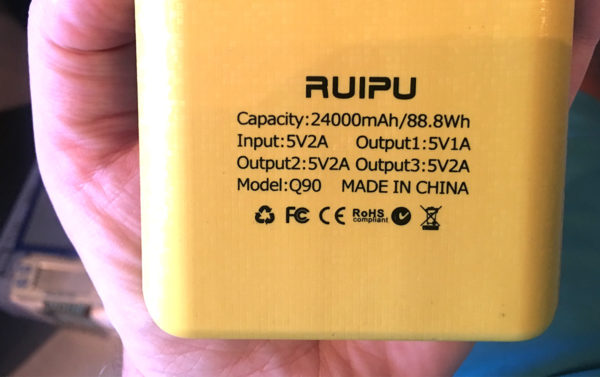 I use it with all kinds of gadgets these days. My GoPro cameras for example, when used either at my desk for screencasts or in the field for interviews. I can keep them going for hours when powered by the Ruipu. The internal GoPro batteries lasts just over an hour, which for interviews isn’t a long time (and replacing them means you have to mess with your framing). When attached to the Ruipu, it’s like having unlimited power without having to be near a power outlet.

The power bank comes with two small accessories: a micro USB cable to charge it up, and a bendable USB fan. The latter may sound like a gimmick, but it’s a really nice touch. When our air con unit broke right after Hurricane Irma, we could use that fan to keep us cool (anyone who knows what a summer in Florida is like without air conditioning will appreciate that fan). 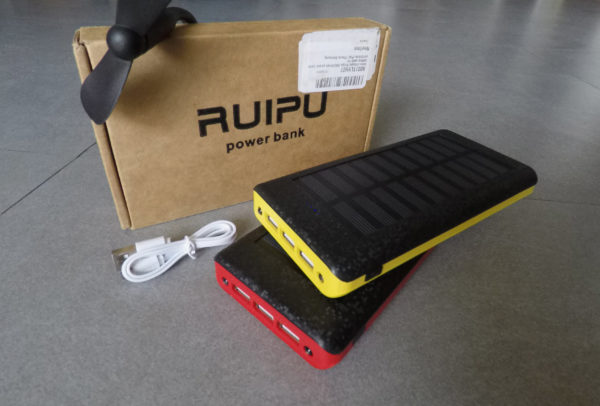 What’s in the Box?

You’ll also get the manufacturer’s email address with a 6 months warranty. If the product develops a problem, contact Ruipu instead of trashing this gadget on Amazon.

How does it work?

On the previous product, I’ve seen reviews by confused users who couldn’t figure out how to operate this power bank. It’s really simple once you understand the philosophy behind the product.

By default it’s in “charging mode”, which means the unit charges itself up. This happens either from the solar panels, or from a connected USB power source. Four small (and not too bright) blue LEDs indicate the unit’s charging level. Each solid light stands for roughly 25%, while the remaining flashing lights indicate the unit is charging itself up.

If you connect a device you’d like to charge up (like a mobile phone or a tablet), the unit needs to be put into “discharge” mode. To do this, press the button on the side once. As soon as you do, whatever is connected to the three main USB ports will get power and start charging up (which will in turn discharge the Ruipu).

Note that the unit cannot both charge itself and other connected devices. It’s either charging or discharging itself. To fully charge up the Ruipu’s large internal power cells, it will take several hours. The time this takes depends on how powerful your charger is. With the 2.4 A power charger I’m using, it takes about 4-5 hours. 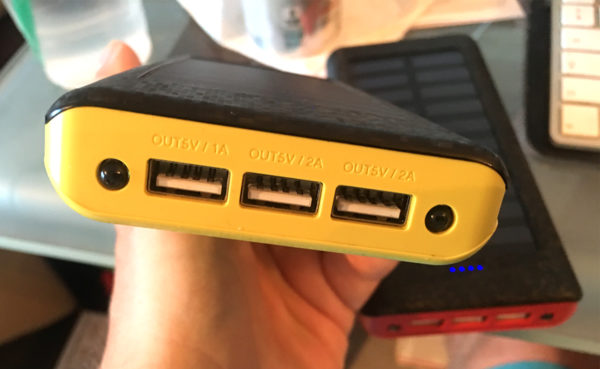 The Ruipu has three USB outputs to charge up other devices. Those can all be used simultaneously, so you can charge a maximum of three devices at the same time. Two outputs can fast-charge your devices, delivering up to 2 A in the process. For example, the iPhone 6s and above can utilise the extra power, a technology commonly referred to as “fast charging”. The third USB port can deliver up to 1 A.

If you connect a fast-charging capable device to the 1 A port, it will charge slower. When you connect a standard-charge capable device to a 2 A output, the device charges as it normally would. It won’t be able to make use of the extra power that’s available. The good thing is that the Ruipu is intelligent enough to only deliver only as much power as the device will ask for, so there’s no danger in your devices being over-charged or breaking in the process, no matter which port you use.

How to use the built-in light

The Ruipu has a built-in emergency LED light. To switch it on, press the button on the side twice in quick succession. To turn the light back off, double-press the button again. The light can be used while other connected devices are charging up.

The light isn’t going to illuminate the side of a building at night, but it’s perfect for quickly shining a small torch into your drawer or underneath your desk (for when you’ve dropped those tiny memory cards again).

How powerful are those solar panels?

Solar panels are by definition not very powerful. As such, even with large surface areas, not a huge amount of wattage can be obtained from them. I must admit I thought at first the solar panels are a bit of a gimmick, and I stated as much in my previous review.

Since then, over the last year, I have changed my mind: the solar panels are a very useful addition to this product, and they do charge up the Ruipu gradually over time. The way I use it, I hardly ever have to charge it via USB anymore! The Ruipu seems to have sufficient charge all the time, because during the day, the unit uses our strong Florida sunlight to top itself up. I didn’t think it would make that much of a difference, but it does. I was pleasantly surprised!

Can it charge itself up completely via solar energy when it’s empty? Possibly – I haven’t tried it yet. A reviewer on Amazon Germany did the maths, and he suggests that it would take roughly a whole month for 24,000 mA to be charged via the solar panels alone. Be that theory as it may, I see the solar option as a casual top-up charging option, and I rest easy knowing that I can charge the unit even if the power grid is down. It takes time, but it works – and it works very well. 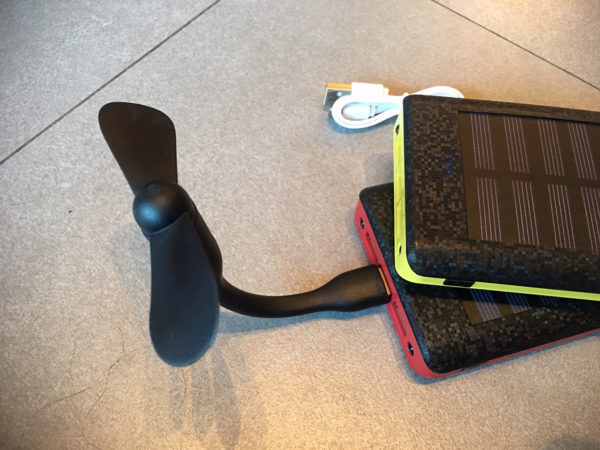 One thing of note is the unit’s size. It’s large and rather heavy due to the amount of power cells inside, weighing just under one pound (or 430 grams). It’s about the size of an iPhone Plus or other mobile phone with a 6″ screen, and almost three times it’s thickness. It measures roughly half an inch or one centimetre.

This means it’s perhaps not the best option for a power bank to be carried around in your pocket at all times, for which smaller and lighter units would be a better choice. But if portability is not a consideration, the Ruipu power bank is currently my favourite power generator in the field and around the house.

If you’re in the market for some additional portable power, I highly recommend the Ruipu. It hasn’t let me down so far, and their customer service is excellent

In the US, this solar power bank is sold by Ruipu. However, in other countries I’ve seen the same design (sometimes in different colours) made available from different brands / manufactures. I suspect that it’s the same unit with a different branding (but that’s just a guess).

Find links below for several countries and compare them for yourself: