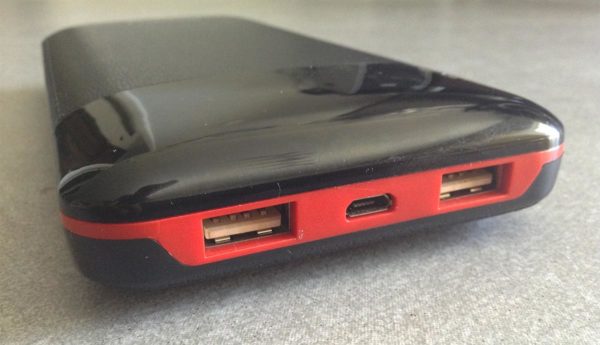 I can’t get enough of the RUIPU series of power banks. You can never have enough charged-up external batteries around, especially during hurricane season. Hence I’ve decided to invest into another model by the same company, namely the RUIPU Model 121 as pictured above.

Like my other RUIPU power banks, the 121 is a 24,000 mAh large and heavy external battery, with a micro USB input for charging and two USB outputs to power other devices. It’s about the size of an iPhone Plus / Max or equivalent smart phone with a 5″ screen, just over 1cm or half an inch in thickness. It weighs about one pound, so it’s on par with the other RUIPU models I own (such as the solar Q90 or the white quad-output Q80), maybe even slightly slimmer.

The noticeable and interesting difference with this unit is that it has a large blue LED panel at the top instead of the small blue dots, which lets us take a more accurate look at the remaining amount of power in the bank. That’s a very nice touch.

When looking at the front, the right USB output is fast charge capable and provides up to 2A of power. It is possible to charge two devices at once, with the other USB output being a 1A standard charge port. Again, there’s a safety mechanism in place so if a device is not fast-charge capable, the 2A output will only deliver as much juice as the device can tolerate.

The LED screen is identical to the one used on the RUIPU Q80, albeit implemented in a slightly dimmer way. In my opinion it’s easier on the eye because it’s less bright, and it feels like it’s using up a little less power than the one integrated into the Q80. 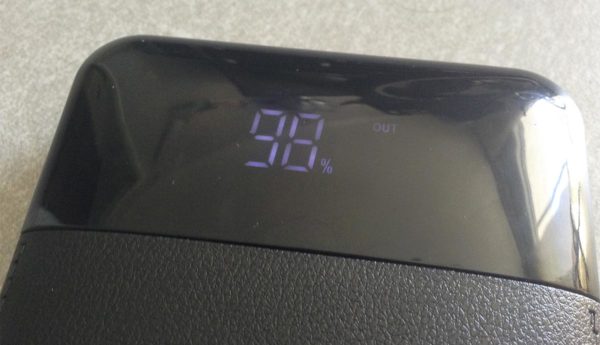 The display will show which port is charging an attached device. Note that this is “hard wired”, so if a device is attached to the right (fast-charge capable) output, it will always show up as 2.1 A on the display – regardless if the attached device is actually using that much power. There’s no integrated power meter hidden in there (although, if you’re looking for one of those, Louis Rossman has one available on his site for about $10 – I’m thinking of getting one).

When a device is attached, the display will light up for about 20 seconds, after which time it will go blank again to preserve power. All you’ll see is the word “out”, telling us that the RUIPU is still charging up an attached gadget.

The unit has a very nice rounded feel to it, it’s black with a thin red stripe on the outside. The surface has a faux leather pattern imprinted on it, with matching faux stitches around the edges.

It looks very beautiful, with the added benefit that this pattern adds an anti-slip function to it. The Q80 looks similar, but this model 121 feels a little nicer in my hands – just an observation. 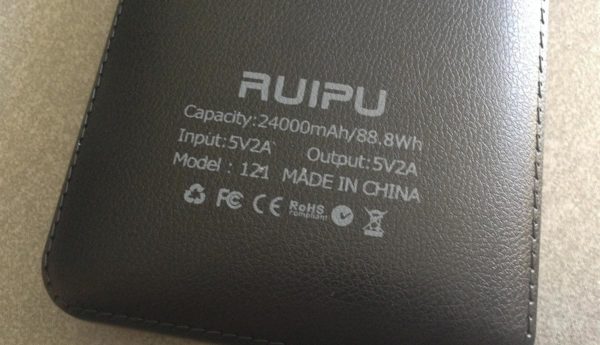 As for performance, it’s just as amazing as the other RUIPU 24,000 mAh models I’ve tried. It takes about 5-6 hours to charge up the unit in full with my RAVPower 5A Power Charger. Other USB chargers may take a little longer, depending on how much juice they can provide. I recommend to use a charger with at least 1A of power, otherwise it’ll seemingly take forever to fully charge your RUIPU.

Don’t get me wrong, it is perfectly possibly to charge this unit with a 0.5 A wall charger (like from your computer or your iPhone wall wart), but due to the size of the RUIPU’s internal batteries, it will take may hours. On this note, the RUIPU is capable of fast charging itself, so the more juice you supply, the quicker it’ll charge itself up.

Once charged, my wife’s iPhone 6s takes about 15 minutes to gain 10% of charge via the fast-charge port. In this time, the RUIPU loses about 2% of charge. This is not an accurate representation of course, because this observation will be different depending on how much charge either battery already has. For example, it’ll take longer to charge a battery from 90% to 100% due to trickle top-ups. The same battery will appear to charge faster from 10% to 20%. It’s the same on discharge.

In my experiments, when my own iPhone 6s Plus has about 20% left, it’ll take the RUIPU about two hours to charge it fully to 100%. In this time, the RUIPU will lose anywhere between 10% and 20%. This tells me that I get around 5-6 full iPhone Plus charges out of one full RUIPU charge – probably more because it’s likely I’ll plug my phone in before it reaches 20%.

I also use the RUIPU with a GoPro camera attached. That’s one power hungry little device when it’s recording, and its internal battery lasts for about 1.5 hours give or take. With the RUIPU attached, I can record for countless hours.

I think of this RUIPU 121 as an alternate version to the Solar Power Bank by the same manufacturer. It has the same internal battery, but instead of a solar charging option, we now have an accurate display to see how much power is still in here.

I must admit that I like both versions, and like the idea of the USB fan and LED light you get with the solar version. In addition, the solar version has three USB outputs, and the white RUIPU Q80 even has four.

It really depends on what’s important to you: amount of outputs, emergency capabilities, or being able to see exactly how much power is still in the bank. 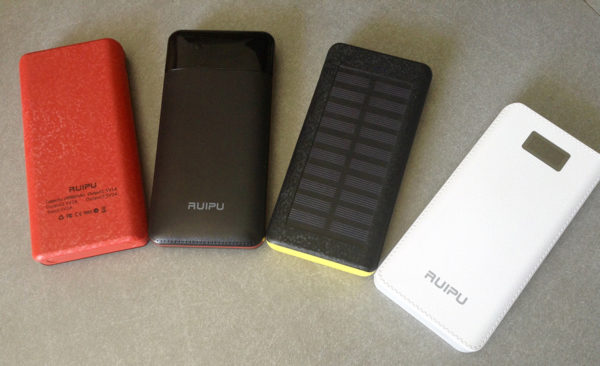 With our ever growing demands for mobile power, these 24,000 mAh units are a godsend – and this RUIPU is no exception. Design-wise, this model 121 is the winner out of all the RUIPU’s I’ve tried. In regards to performance, my tests show that they’re all more or less on par with one another – with this model perhaps taking the lead on power preservation with the auto-off option on the display (something the Q80 lacks).

Each different model has slightly different features: if a solar charge option and emergency light are important to you, check out the RUIPU Q90.

If four USB outputs are important to you, or if you like the idea of being able to charge your power bank with two types of input cables, take a look at the RUIPU Q80.

If two USB outputs are enough for you, and you like the side oaf an accurate LED screen to display details about your current charge levels, and if you’re looking for a portable almost everlasting supply of mobile power, look no further than this unit. I highly recommend it.

I get a small commission if you decide to buy from the links in this article. Your support is greatly appreciated!