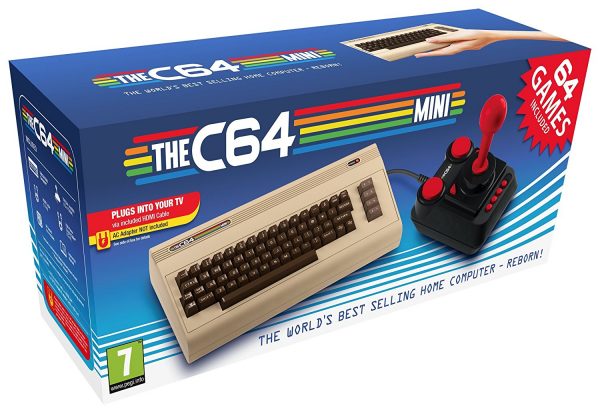 In Europe, the brand new C64 Mini has just been released. Although I don’t have one myself, I’ve been following the Indiegogo campaign and have watched several “unboxing reviews” on YouTube. I must admit it’s a neat little machine, and I like the idea of somebody making the Commodore days available to a new generation of users.

However, I can’t stop thinking “what’s the point of this exercise?”

Don’t get me wrong, it’s not that I dislike the idea of Commodore BASIC making a re-appearence, or of new Commodore “herdware” being developed. Quite the opposite in fact.

What I can’t understand is why the hardware needs to be built on an emulator rather than real hardware. Because we HAVE that already, and completely FREE at that. We therefore do not need exotic hardware that’ll quite probably be off the shelf in a matter years.

I feel that it was different with the C64DTV project, with which Jeri Ellswoth reverse engineered the whole system using a new and combined chipset, basically building a new C64 wit modern components.

The Mini on the other hand – at least as far as I know – is a down-stripped Linux box which runs a software emulator. It could emulate anything. I might as well run VICE on my modern (and replaceable when broken) laptop, plug in a USB controller and get the same result. For free.

If a company goes through all the trouble to recreate the C64 with modern components, I feel they should recreate the whole thing rather than something we already have access to. If it’s all about “some output on the screen”, then an emulator output or dedicated hardware output are arguably the same. And I guess that’s what the Mini project is all about: plug-and-play screen output.

But what I’d be more interested in is a fully reproduced piece of hardware, something to which I could solder homebrew stuff on the user port, or something I can plug in real floppy drives. I guess a fully recreated system is what I’m asking for, one that looks AND behaves exactly like the old breadbin. A system that lets me POKE a value and set a line on the cartridge port on high. That sort of thing.

With that in mind, I can’t help but wonder who the target audience of the Mini is. Total geek enthusiasts (like me and thousands of others around the globe) won’t be happy with a compromise. So perhaps it’s newcomers who hadn’t been born when the real Commodore devices were around? I wager that they might not care about pixelated slow and way-too-hard-to-enjoy retro games. Who then is the Mini aimed at?

A full-sized authentic recreation, as announced in the original crowdfunding campaign, definitely YES. I’m looking forward to that. Likewise, I can see the appeal of a handheld pocket sized version that plays old-school C64 games. Love both of those ideas. Both of these were annouced in the campaign

But the Mini? I just can’t see the point. If I want to play C64 games like back in the days, I might as well just play them on an emulator, or on authentic nostaliga hardware – with a fully working keyboard all.

Another question I have is, how did it go from these two models to the Mini in the first place? Whose idea was it, and what was the reasoning behind it?

I’m not bemoaning the project, not at all. I just don’t quite understand why we have it, that’s all.

I give Retro Games 10 out of 10 for the idea, and for seeing it through to release. But I can’t understand the concept of the Mini, or why it was produced at all (since it wasn’t part of the original idea behind this campaign). So only 5 out of 10 for that.

I’m interested to see the full size version as well as the handheld version. But I can’t see myself buying a Mini at this point.